Print file double-sided, fold lengthwise down the middle, and color!

Print the activity sheet and draw a line from each gift to the correct mom.

Before reading the book, discuss these questions:

After reading the book:

• You can write your own book in a similar style. Start by brainstorming ideas to answer these questions:
What would not be a good present for your dad? For your brother or sister? For a grandparent? For your teacher? For your pet dog?
• Pick your favorite ideas and draw funny pictures to go along with your story.

about.com review
My book was recommended in this article about Mother's Day books
3rdgraderreading review
Click here to read a great review of my book!

Mother's Day is coming soon. What should you give your mom? Well, it depends. But here is my advice on what NOT to give her.
Do NOT give her a bucket of big, fat worms...
unless she is a bird. 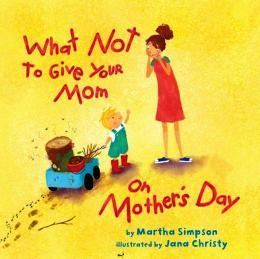 The plot itself is simple enough. A boy explains what NOT to give your Mother for Mother's Day--for example, "Do NOT give her a bucket of big, fat worms..."--but then clever adds: "unless she is a bird."

Everybody knows you gotta add animals to a picture book to make it, and it works here too, but more than that I think it speaks a message of diversity which is very important. Families are all different and Mothers are all different. I love that this book says that without really saying it. It's also hilarious, because what isn't funnier than a little boy innocently giving nasty Mother's Day gifts?

Overall, this is a wonderful book that will instantly become a Mother's Day tradition. What's more, I think it's smart enough that youngsters will want to read it year round. The illustrations are great fun and the story is a joy to read aloud. I highly recommend it!

4 out of 5 stars April 6, 2013 by Beverly Goodreads
This is a great book to not only discuss Mother's Day, but the animal world, too. The colorful illustrations will appeal to young children. Great read aloud for younger children. It would also be great for a classroom compare and contrast lesson on the difference between animal moms and human moms.

Q: How did you get the idea for the story?
A: As a children's librarian, I see a lot of books. When I was trying to find a picture book to read for Mother's Day, I realized that all the stories had the same plot - a little boy, or girl, or animal was trying to think of what to get his or her mom for Mother's Day. So I thought it would be fun to turn that around, and think of things you should NOT get your mom.

Q: How long did it take to write the book?
A: Once I got the idea, I wrote it pretty quickly. I had to do some research on what would make good presents for various types of animals. I had a long list of ideas and used 12 of them because I thought it would be a 32 page picture book, with 2 pages for each animal. It took me about a month to write, but then I had to do a lot of revising. My editor wanted me to re-write it for a younger audience and thought it would be better as a 24 page book. We discussed ideas back and forth for another 3 months before we decided on the final version.

Q: Did you pick the illustrator?
A: No. My editor chose Jana Christy to do the pictures. I had a general idea of what I thought the book would look like, but Jana's illustrations are much better than what I had imagined. I did get to see an early version of the book, when it was just sketches, so I was able to make a few suggestions. I am very pleased with how it turned out. Jana did a terrific job!