I hope the year ahead will bring an end to the troubles that plagued us in the past year, along with health and prosperity for all.

Welcome to the third issue of The Simpsonian Muse. I am your scribe, Martha Seif Simpson, Author and Children's Librarian. As the header says, this monthly newsletter will feature:

·       Stuff you Can Use – A mish-mash of activities, crafts, story-stretcher ideas, or whatever I am excited about sharing

If you missed last month's newsletter, you can click the button on the left sidebar to catch up. Thanks for joining me on this adventure. I hope you will find something to inform and entertain you.

Some people like to start off the new year with resolutions. I prefer to set goals instead. At the end of the year, I go back and grade myself. If I accomplish over 50%, it was a good year. (I scored 51% for 2020. To be fair, the pandemic messed up several things. Can I get a 10-point survival bonus?)

My personal goals always include something related to writing. For 2020, I accomplished my several-years goal of signing with a literary agent. Yay! Unfortunately, I had a couple of book deals fall through (Boo, Covid!) but I did keep writing and I have a few manuscripts in the works for this year. Also, I started writing this newsletter. So overall, I did OK.

For 2021, my goals include completing projects that are currently in progress so they will be ready to submit. These include a picture book biography, an early chapter book, and more picture books. Hopefully, I will have some good news to impart as the year goes on.

I also plan to keep writing this newsletter every month. If you know anyone who would like to subscribe, please pass on the information. Getting people to read this is another goal!

As I mentioned last month, I am serving on the Sydney Taylor Book Award Committee. Presented by the Association of Jewish Libraries annually since 1968, the committee recognizes outstanding picture, middle grade, and young adult books that authentically portray the Jewish experience. We received over 200 books for kids and teens for the 2021 award. That's a lot of reading!

By the time you see this, the committee members will have deliberated online and made our choices for winner, honor, and notable books. But I am bound to secrecy! You will have to wait until they are announced at the Youth Media Awards Press Conference on Monday, January 25th from 8-10 am during the 2021 American Library Association's MidWinter Meeting. The Sydney Taylor Book Awards are usually among the first ones announced. So if you are watching live online, tune in early. You can find information at the American Library Association website (ala.org) and the Association of Jewish Libraries website: Sydney Taylor Book Award

My term on the Sydney Taylor Book Award Committee will continue in 2021. And this year, I am proud to announce that I will be the committee chair. This is a huge honor and responsibility, and I am very excited to accept the position. But before the new entries arrive, I'm going to try and catch up on all the 2020 books I didn't have time to read before. Wish me luck!

Since I mentioned the STBA, here are a few of the books that were recognized by the committee last year.

The Book Rescuer: How a Mensch from Massachusetts Saved Yiddish Literature for Generations to Come written by Sue Macy & illustrated by Stacey Innerst (picture book winner)

This biography tells how Aaron Lansky preserved Jewish history and culture by saving books written in Yiddish and eventually founding the Yiddish Book Center in Amherst, MA. (fun fact: I grew up in the same city as Aaron and we went to high school together.)

Gittel boards a ship alone and travels from the Old Country to America, where she is supposed to meet her cousin in New York. (fun fact: Lesléa and I have the same birthday.)

In this graphic novel, Julian from the Wonder series learns about his grandmother's rescue in France during the Holocaust.

In an alternate 10th century, a Rus girl teams up with a fool to protect a water dragon from a Viking, even though the Tzar has forbidden magic and her family's home is at risk.

15-year-old Lillia flees Warsaw with her father and baby sister in 1940 to escape the Holocaust. They take refuge in Shanghai, China, which has been occupied by Japanese forces, and Lillia must find the strength to help her family survive.

Did you know that January is National Soup Month?

According to the Every Day's a Holiday Calendar, other noteworthy dates in January include:

January 30 – Yodel for Your Neighbors Day

On December 26, 2019 I had the amazing experience of helping to decorate a float for the 2020 Rose Bowl Parade. This was definitely a Bucket List item, and although it was exhausting, I would love to do it again. Unfortunately, the 2021 Rose Bowl Parade was canceled due you You-Know-What. To keep the tradition alive, here are photos taken from my adventure.

My husband, John, and I worked on the first decorating shift on the morning after Christmas. As you will see, this was a kind of a reunion for us, since friends and relatives joined us.

Our friend, Martha Wheelock, was on the committee that sponsored a float to celebrate the 100-year anniversary of Women's Suffrage: 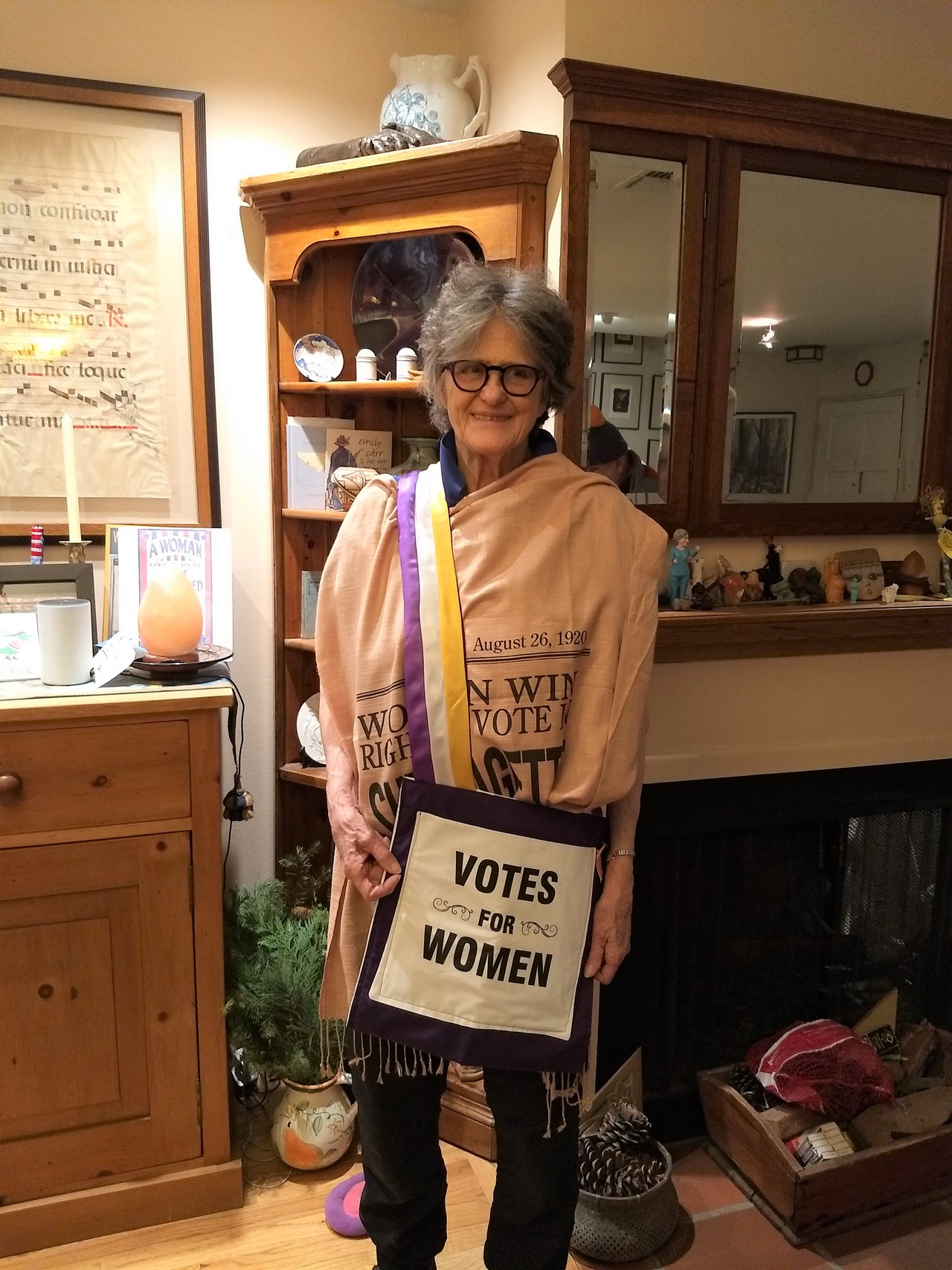 Here is the artist's rendering of the design: 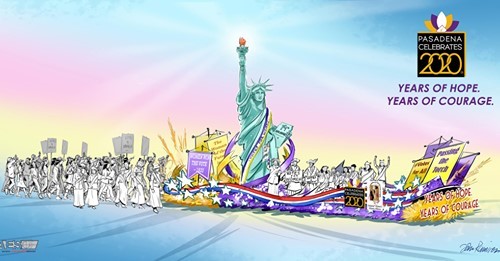 The float had already been built and painted. We met at a large hanger in Pasadena, CA where six floats were being worked on. Other parade floats were kept in a different area. 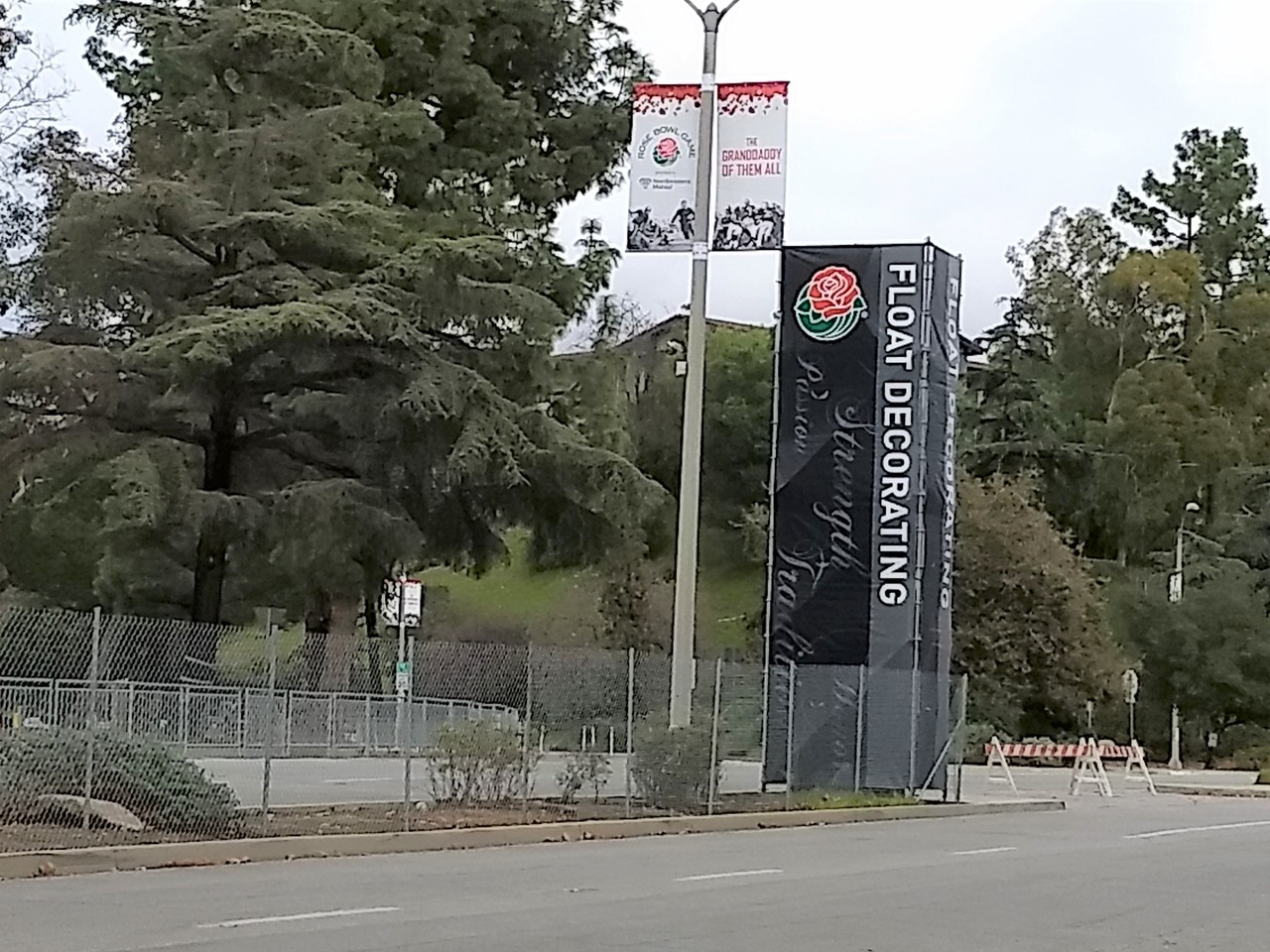 We registered at a tent (white structure on the right. Then went into the hanger (brown building.) 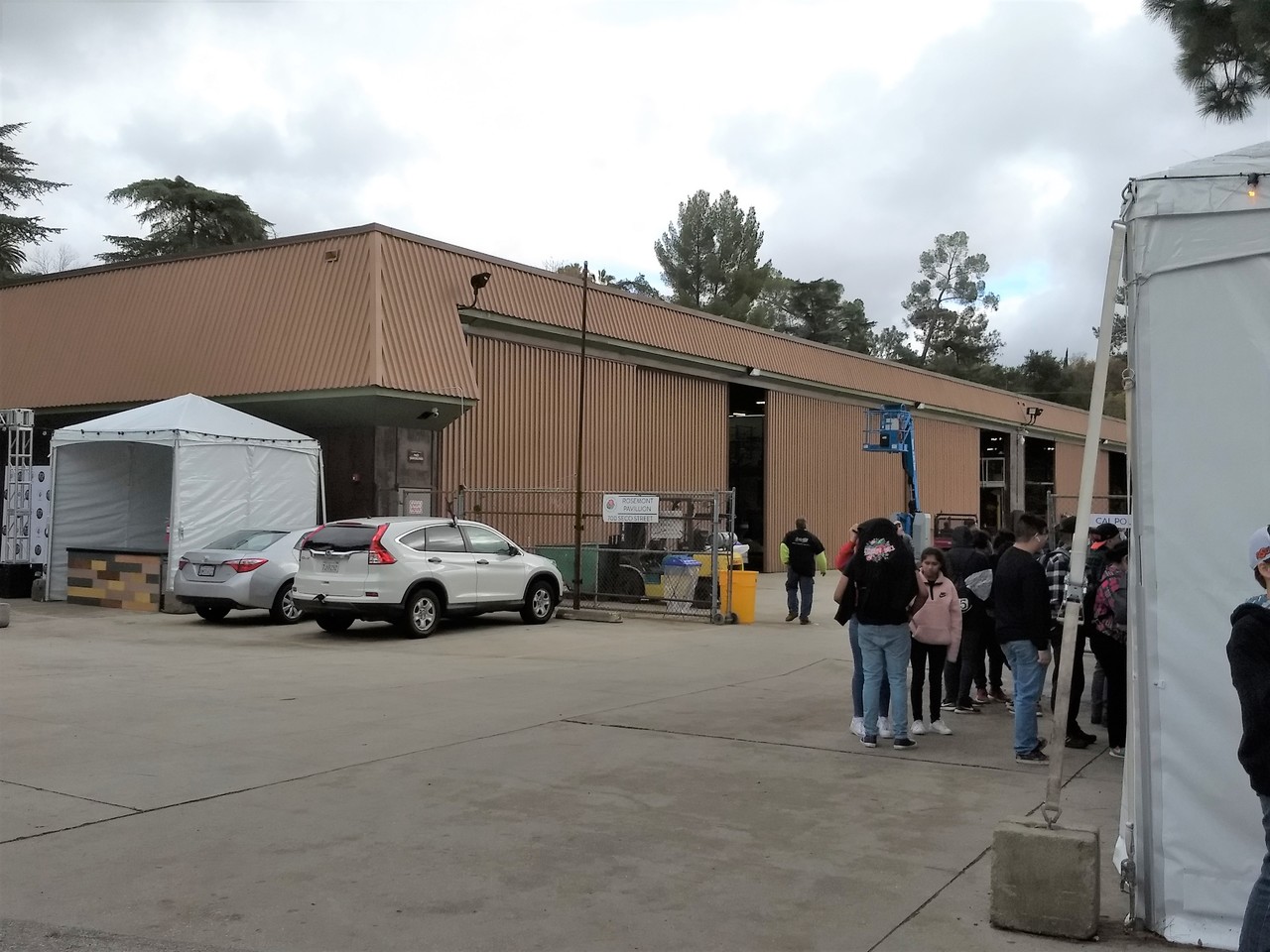 We picked up seeds here. Each barrel contained a different type of seed, berry, or leaf. We got white glue and paintbrush at the other end. We used the paintbrush to smear glue on the float to stick on the seeds, etc. 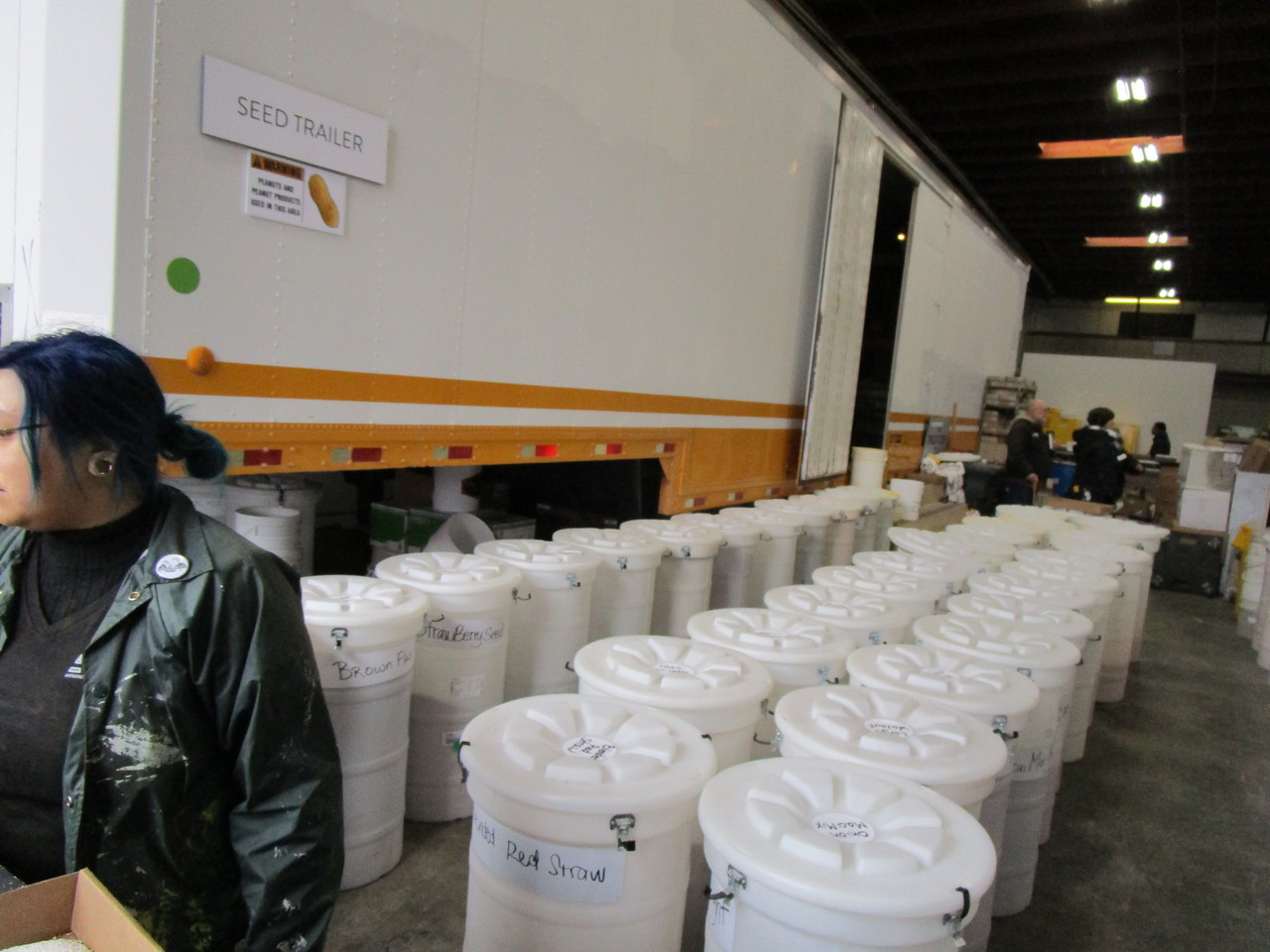 There was scaffolding everywhere. Lady Liberty was too tall to stand up in the hanger and under a bridge along the parade route, so she bent in the middle. Float decorating was a massive endeavor – it had to be done entirely between December 26-31. Several people worked on the float along with us. 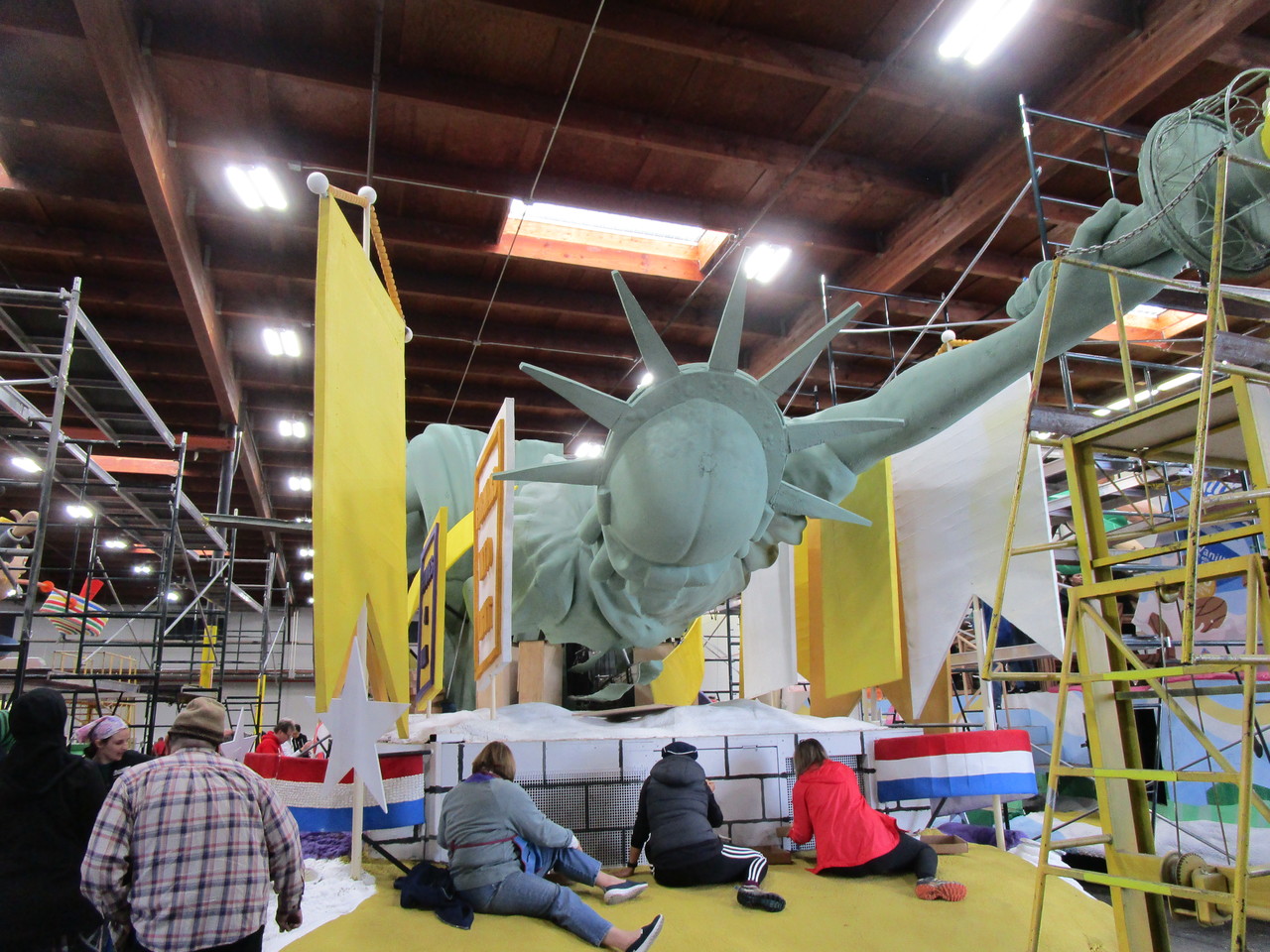 My job was to glue white pumpkin seeds to the ribbon. One. At. A. Time. The seeds all had to face in the same direction, in perfectly straight rows. It took 3 hours to do my 4-foot section! Lots of people had this job.

Since the hanger was open and it was about 45 degrees, the place was cold. I wore 5 layers of shirts.

The guy on the float glued rice to the back of the ribbon, a really messy job that required lots of bending. 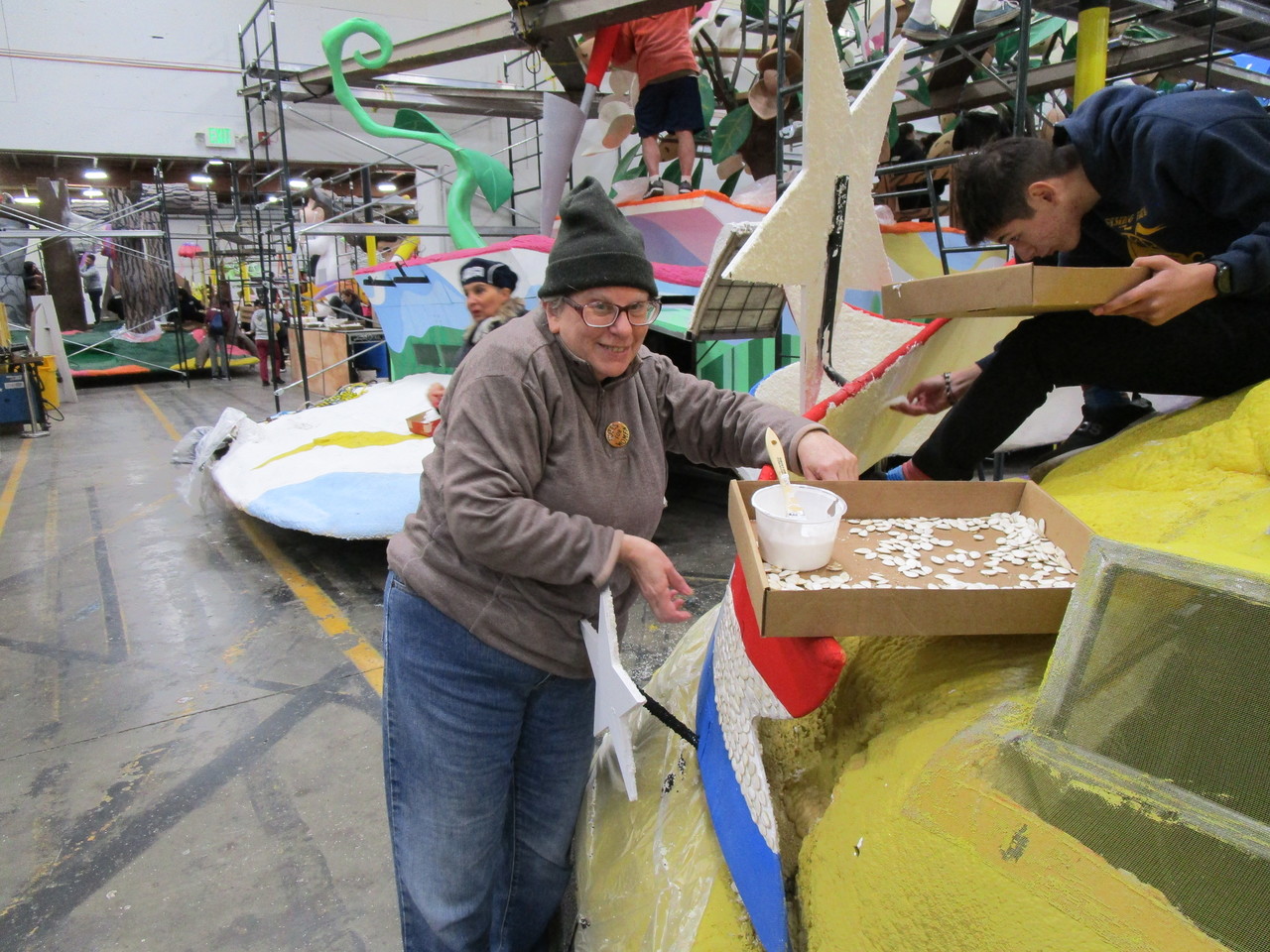 Mike was really good at lining up the pumpkin seeds. 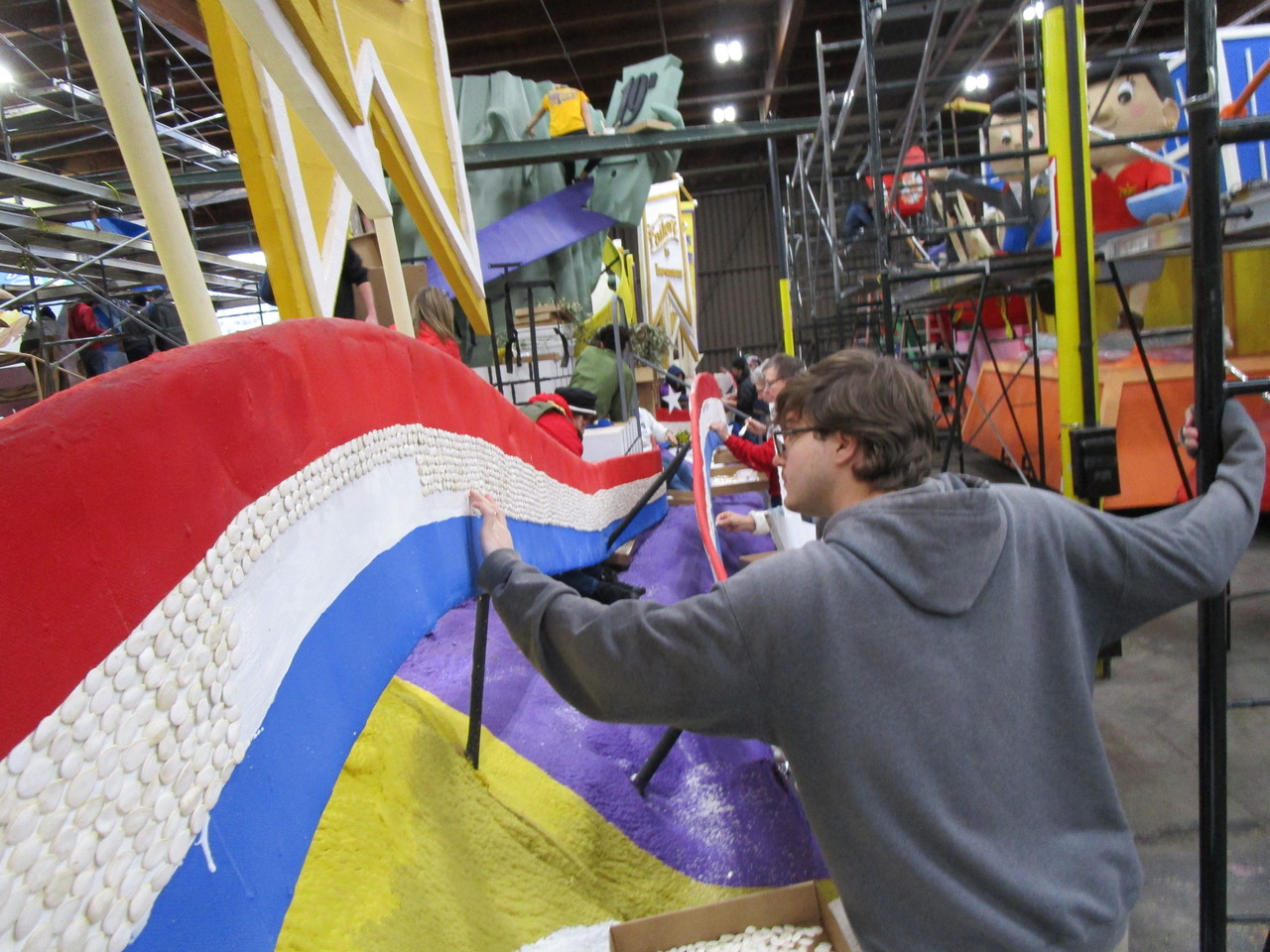 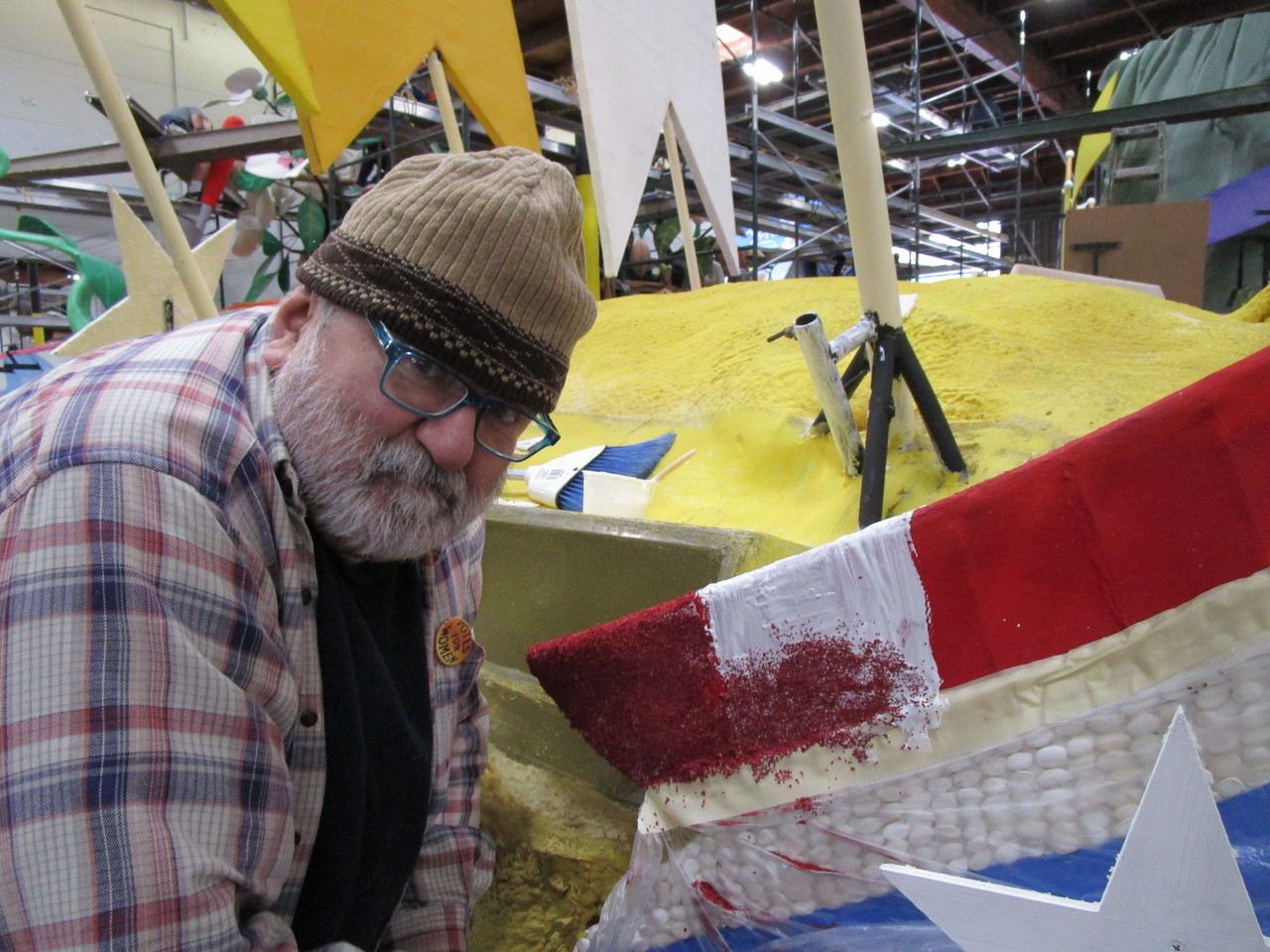 Eucalyptus leaves had to be cut for Lady Liberty. 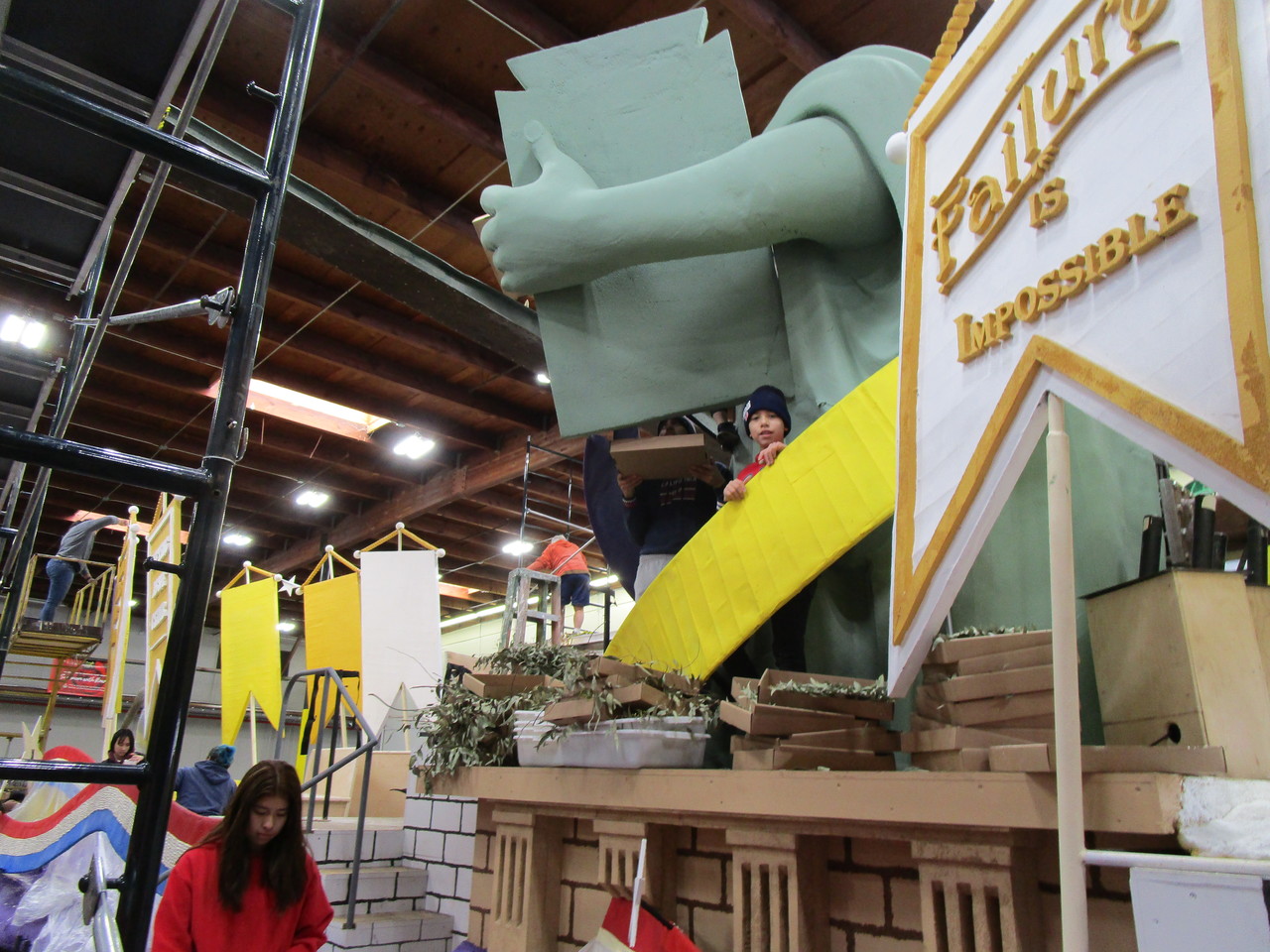 My niece, Laura (on the float) glued rice to the back of the banner. Our friends, Katie (in the purple hoodie) and Victoria also helped. 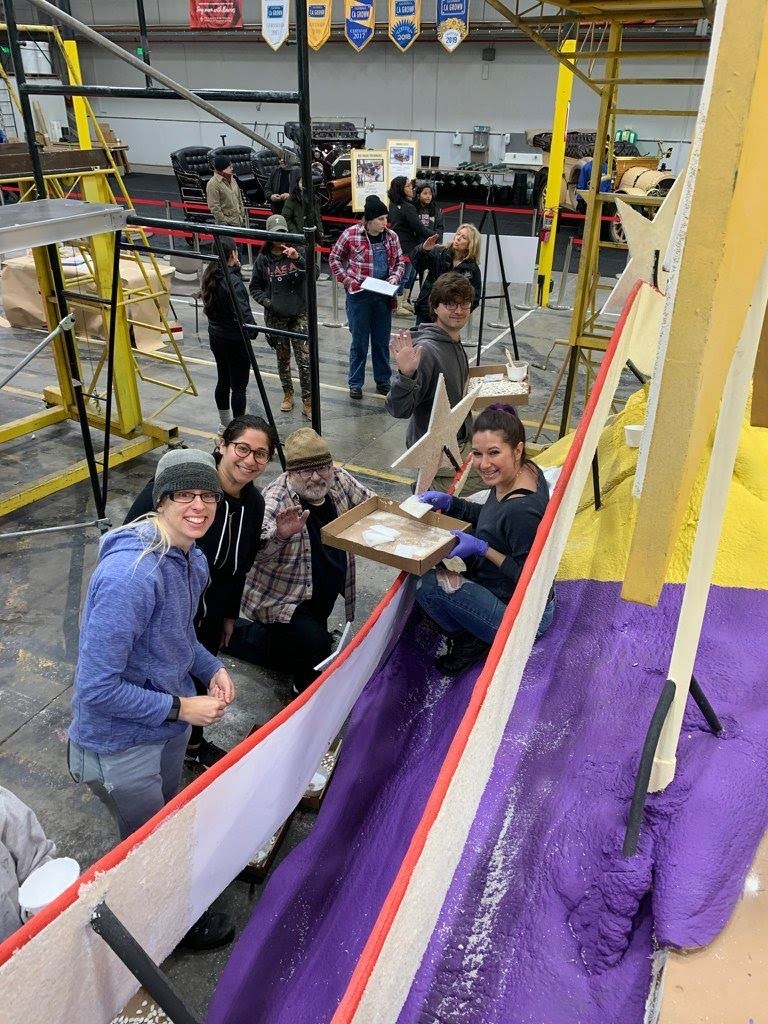 I love the signs on the banners. 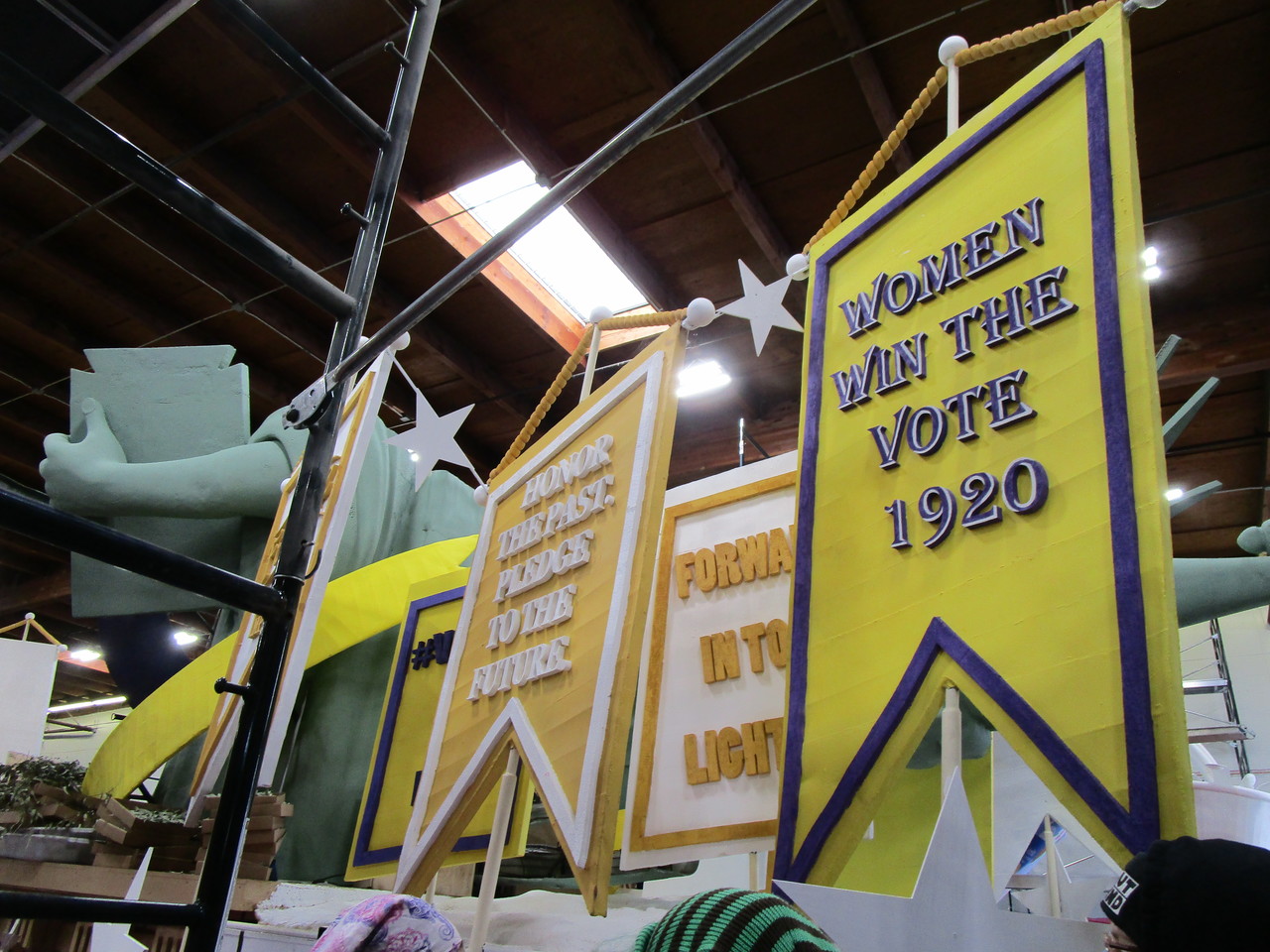 Standing on the float with Mike and my daughter, Shayna. Every part of the float had to be covered. Even the railings were later coated with poppy seeds. 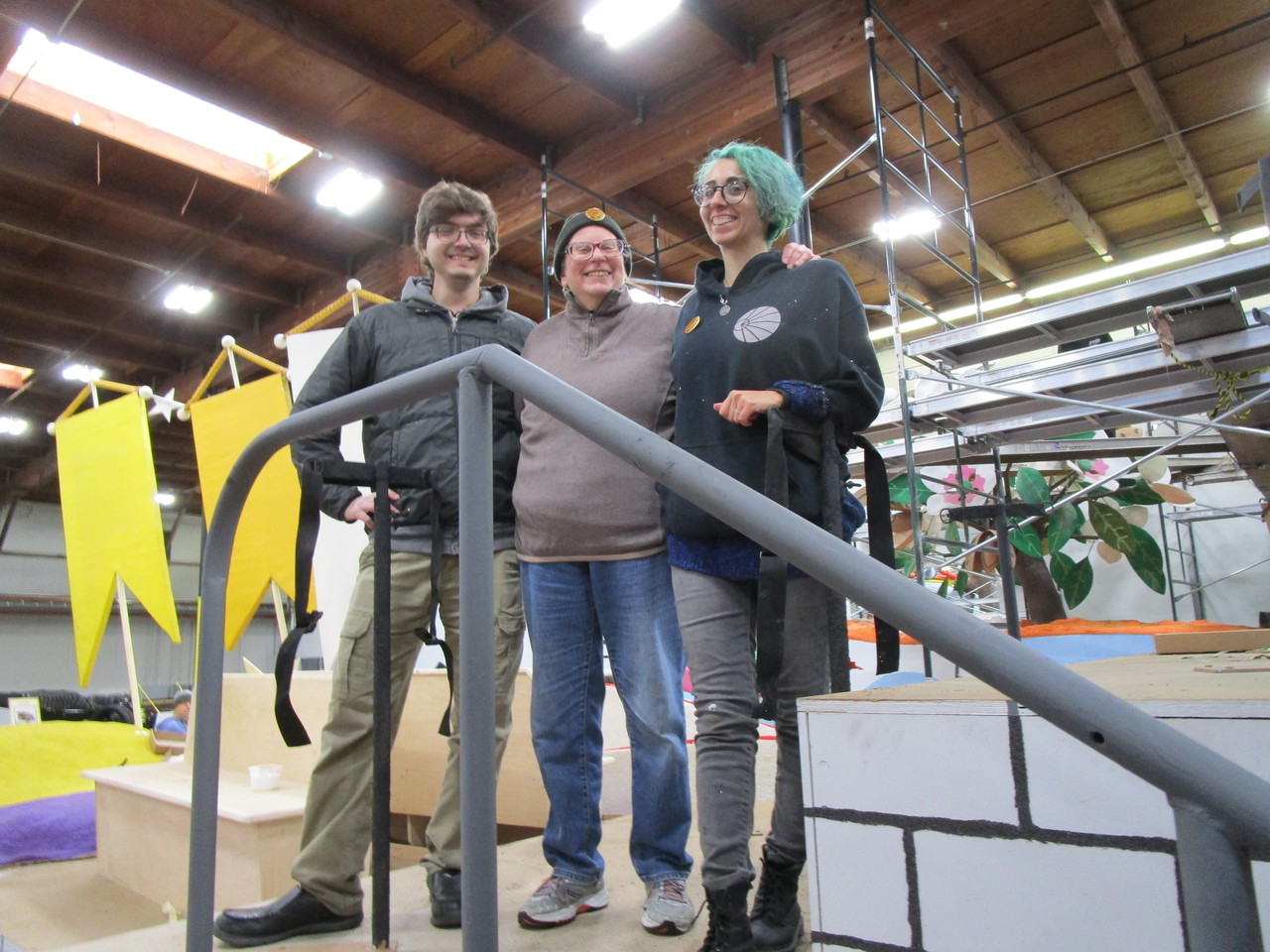 Our group – (top) Laura, Katie, Victoria, Shayna, Mike, (bottom) Kat, John, & me. All of the solid yellow was later covered with vials of yellow roses. After 4 hours of bending, gluing, and freezing in the cold hanger, we were tired and hungry, but very proud of having done our part to decorate the float. 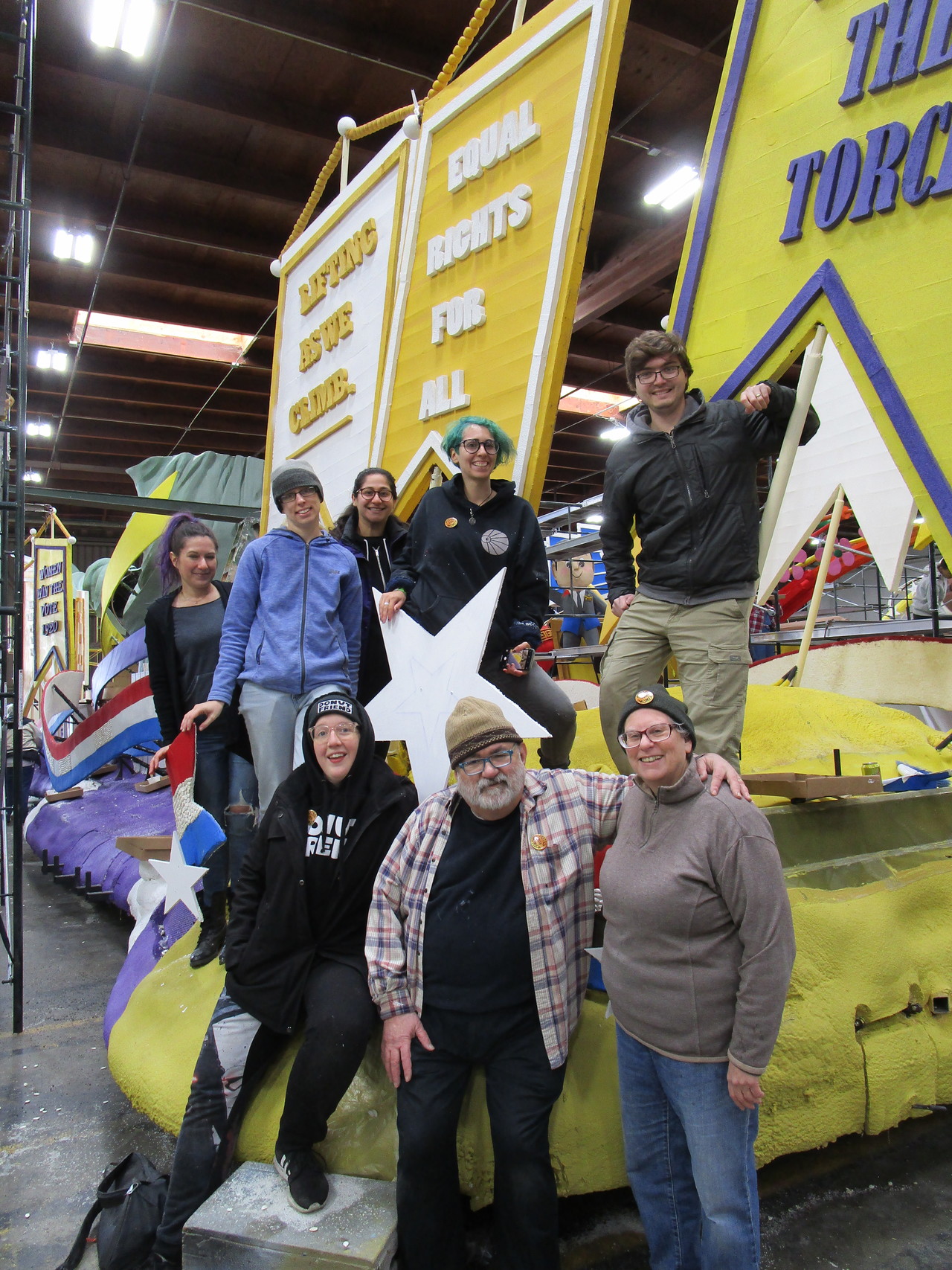 Click here to read a news article about the float

I hope you enjoyed the recap of my Rose Bowl float experience. And since we are in a New Year's mood already, here's a mad lib I wrote for a library program. Have fun with it!

So she asked all her friends for advice, and this is what they told her.

And to end on a silly (but true) note, here is a cartoon by Joe Heller that I think perfectly sums up the past year. Sing it to the tune of The Star-Spangled Banner: 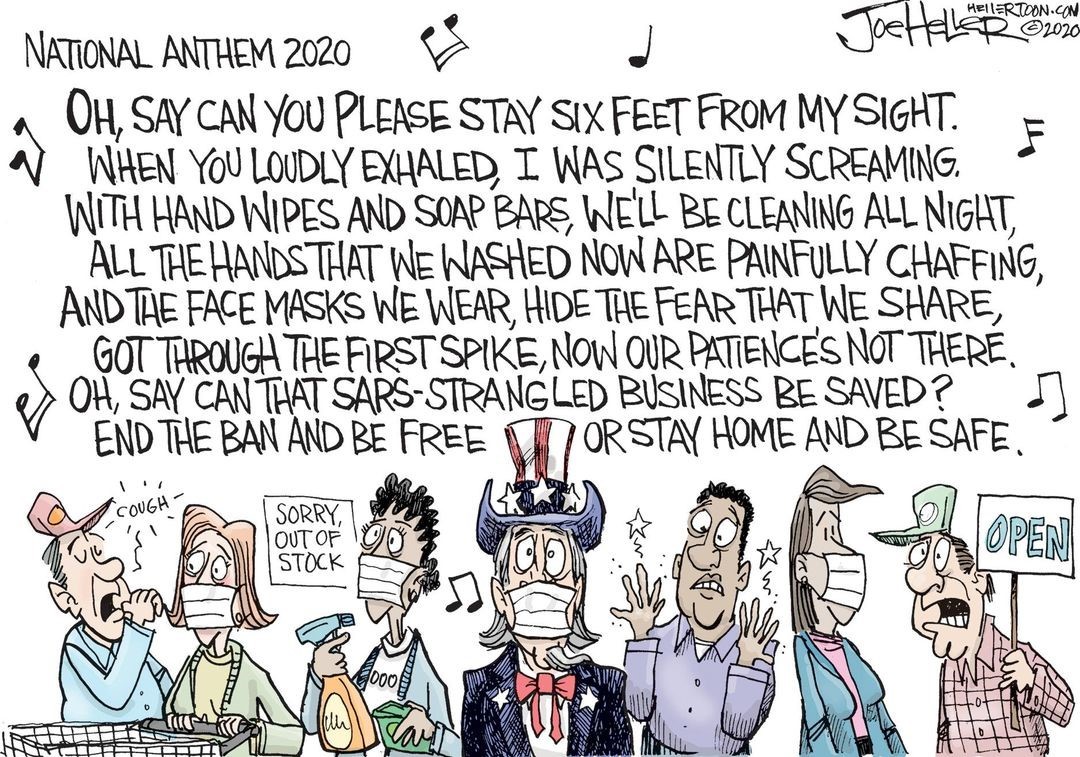 Until next month, remember to stay safe and enthuse your muse!