Welcome to the tenth issue of The Simpsonian Muse. I am your scribe, Martha Seif Simpson, Author and Children's Librarian. As the header says, this monthly newsletter will feature:

If you missed the previous newsletters, you can click the button on the left sidebar on my website to catch up or click here: The Simpsonian Muse

After months of not being able to do any in-person author events, I have two book signings scheduled in one week!

On August 7th, I will be one of 30+ authors and illustrators participating in Books on Pratt, held on Pratt Street in Hartford, CT. For information, see: Books on Pratt

In the June issue of The Simpsonian Muse, I reported that the Connecticut Library Association named me the recipient of the Faith Hektoen Award, which is given annually by the Children's Section of the CLA to recognize the efforts of an individual or group that has made an impact on library services to children in Connecticut at the local, regional, or state level.

The award was in recognition of my work on the Healing Library project, and especially for creating an online kit in April 2020 so that families would have access to resources during a time when the Stratford Library was not open to the public. Coping With the Coronavirus and Covid-19 has been accessed over 600 times by parents and caregivers both locally and nationally. You can find it here: Healing Library

And the press release about the award is here: Faith Hektoen Award Press Release

The award comes with a fancy plaque, which arrived in the mail in July. And here it is! 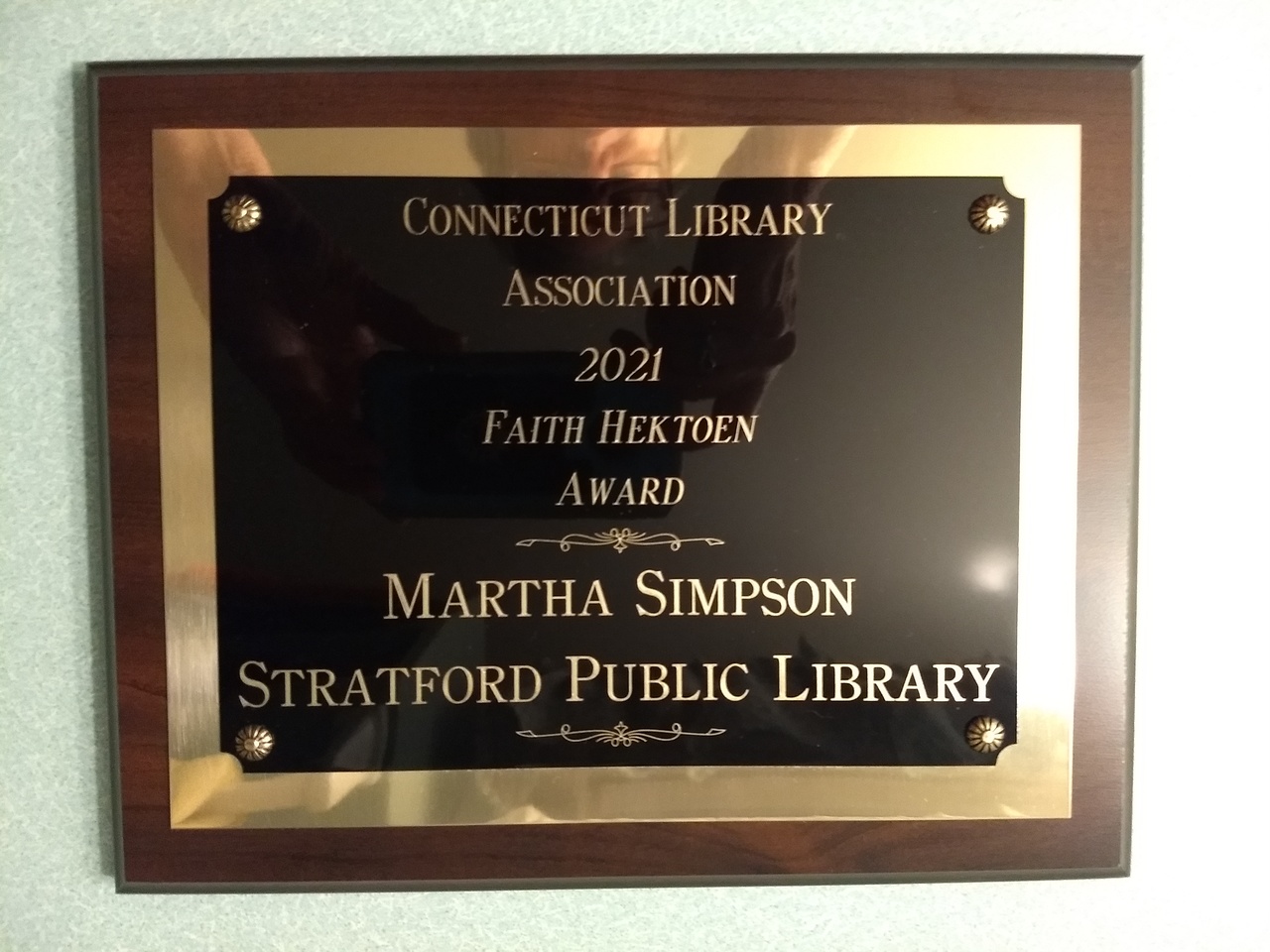 Summer is a great time for hanging out with your friends and making new ones. Whether they are human, animal, or creatures of fantasy, the friends in these books support each other through good and bad times. Find some new friends in these wonderful Friendship Stories.

Before the Ever After by Jacqueline Woodson
ZJ's friends help him cope when his father, a beloved professional football player, suffers severe headaches and memory loss that spell the end of his career.

Busted by Breakfast (Trouble at Table 5) by Tom Watson
When Simon gets in trouble for talking at school, his best friends think up a plan to keep him from getting grounded at home. But will their big plan get him into more trouble?

The Girls of Firefly Cabin by Cynthia Ellingsen Four girls meet at camp. Will their new friendship survive rival cabins, distracting crushes, and their own secrets?

Here in the Real World by Sara Pennypacker
Ware prefers pretending the lot next to the church is a medieval castle to attending Rec camp. When developers want to sell the land, Ware and Jolene, who is planting a garden there, join forces to save their space.

How to Test a Friendship (The Magnificent Makers) by Theanne Griffith
Violet, Pablo, and Deepak embark on an adventure in the Maker Maze, a magical laboratory full of robots, an antigravity chamber, 3D printers, and more.

Marigold Star by Elise Primavera
When a girl from a magical realm accidently sends herself to the human world, she has to make friends with human children to find her way home.

Nessie Quest by Melissa Savage
Ru reluctantly joins her parents in Scotland for the summer, where she meets new friends and searches for the Loch Ness Monster.

The Shark Report (Benny McGee and the Shark) by Derek Anderson
After learning about sharks in school, Benny McGee is afraid to swim in the ocean but a great white shark follows him home and they quickly become friends.

That's What Friends Do by Cathleen Barnhart Sammie and David's long-term friendship is endangered when new student Luke begins flirting with Sammie just when David decides to confess his crush on her.

We Could Be Heroes by Margaret Mary Finnegan
Hank, a boy with autism, and Maisie become friends as they try to save a neighbor's dog that is always tied to a tree.

Did you know August is Family Fun Month?

According to the Every Day's a Holiday Calendar, other noteworthy dates in August include:

On March 1st, 2013, John and I spent our anniversary exploring the Chacchoben Ruins in Costa Maya, Mexico. Our cruise ship, the Holland America Nieuw Amsterdam, dropped us off at this lovely site. 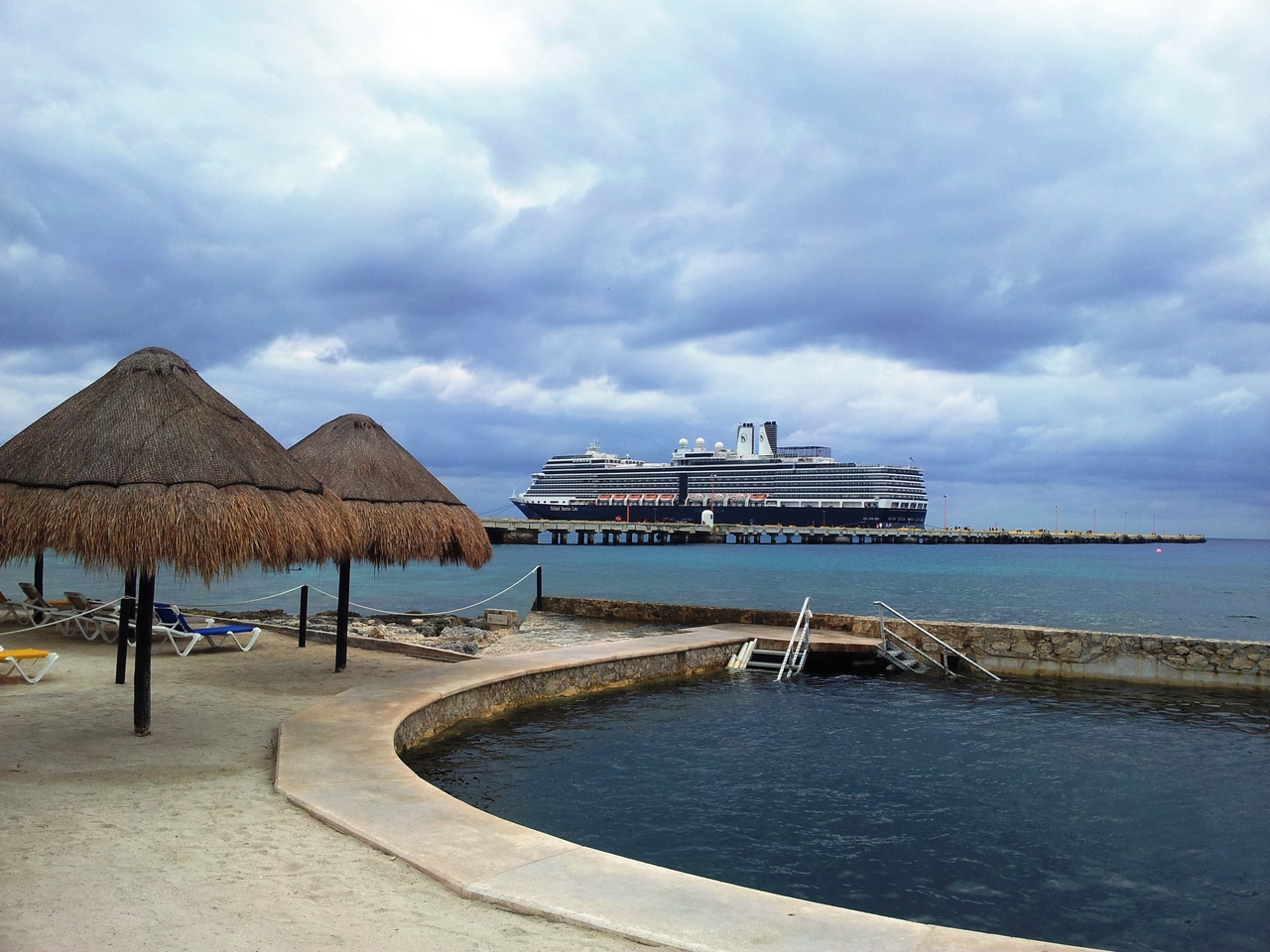 We walked to the beach, where we boarded a bus to take us to the ruins. 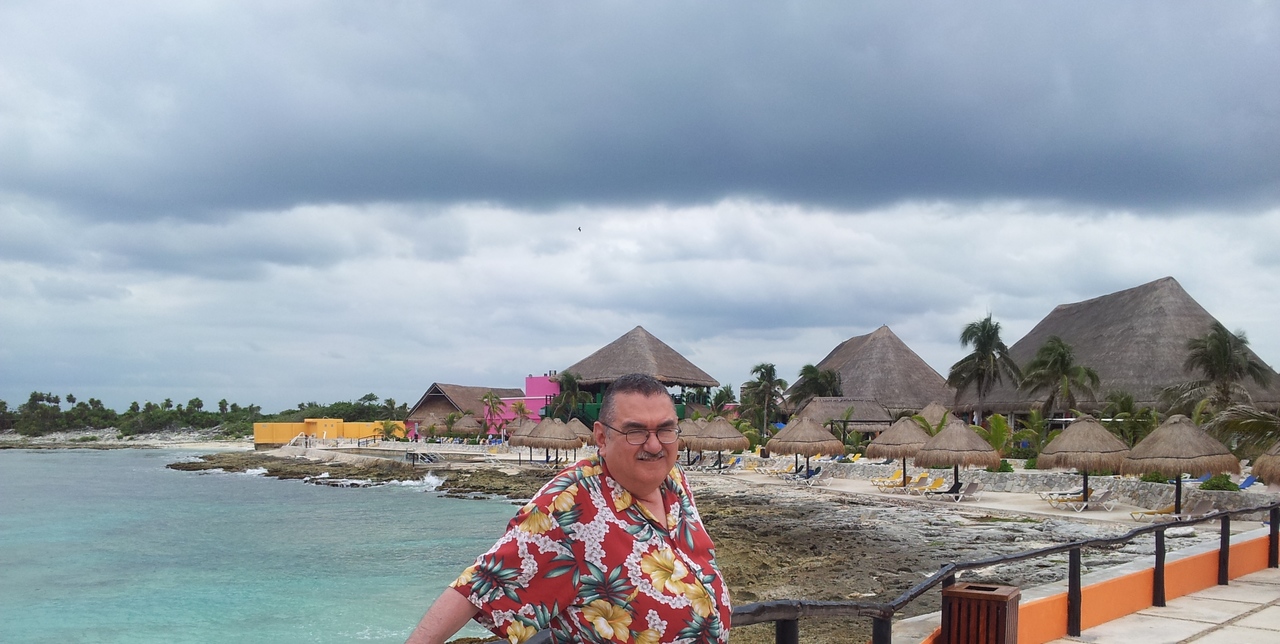 The ancient Mayans first settled the area around 1000BC. By 360 AD, Chacchoben had established the largest community in the region and featured several temples - pyramids built with stone steps. 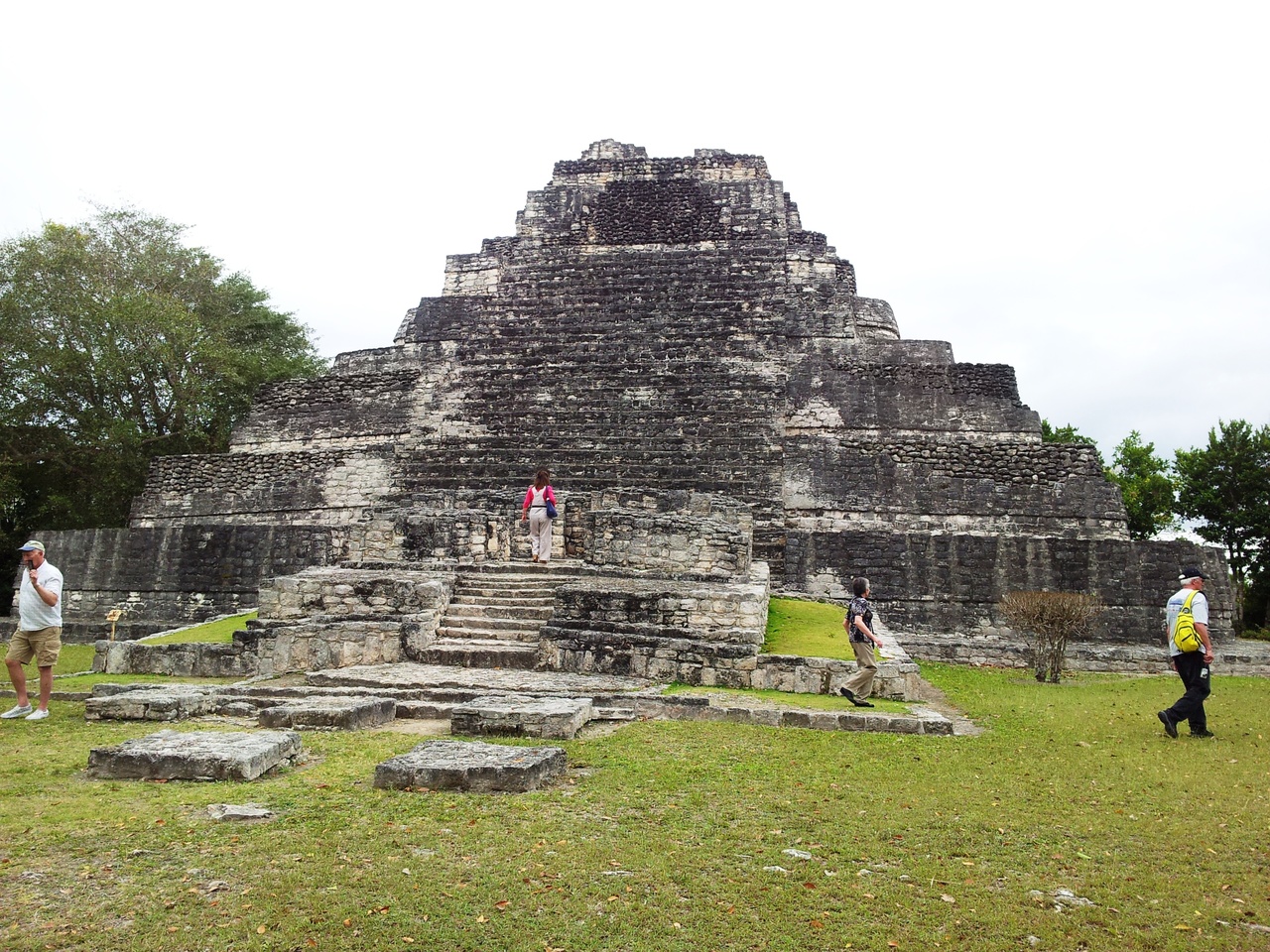 Here's a closer view of the steps. 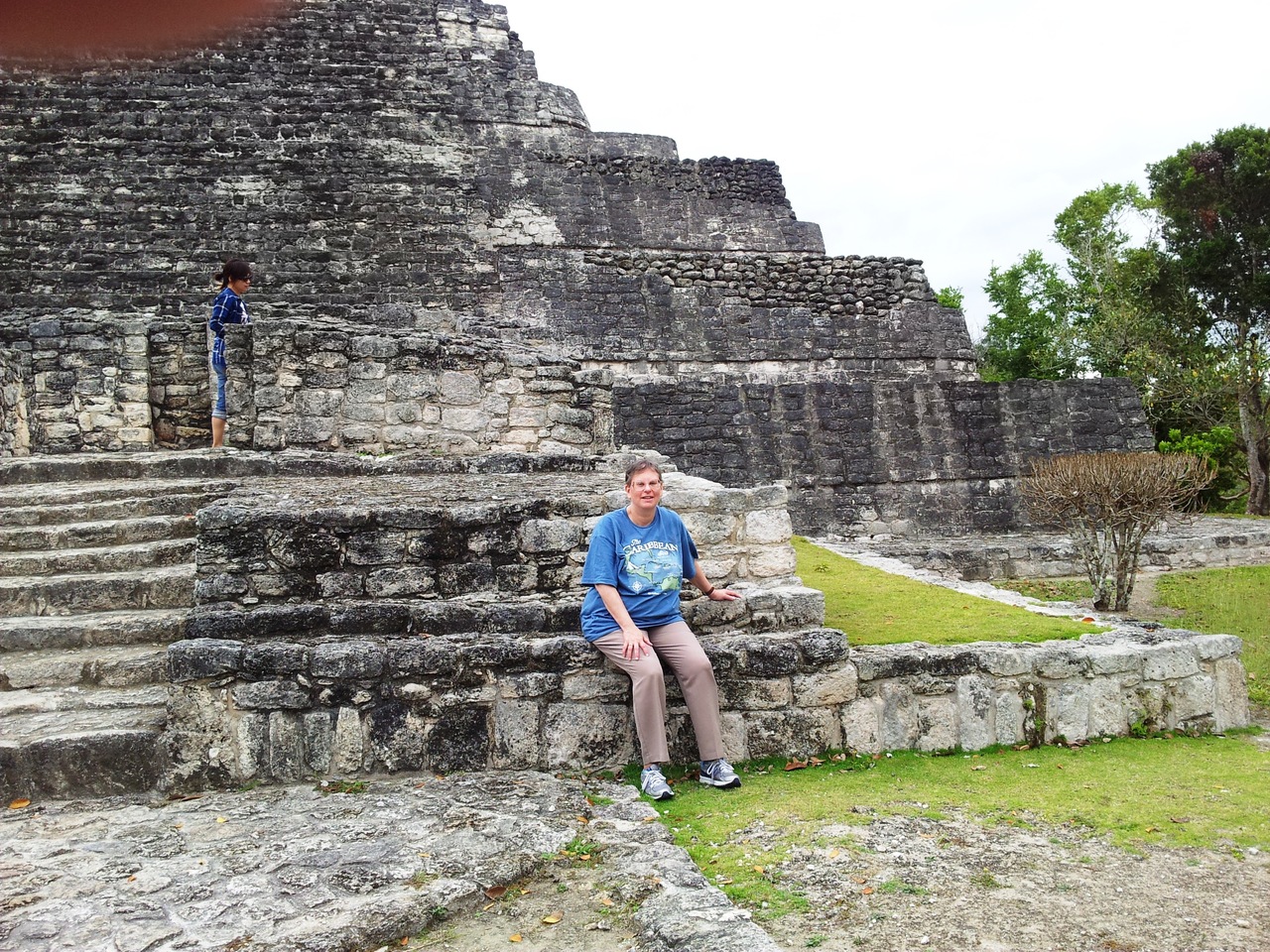 We were allowed to climb up the pyramids. Here's a view of the opening near the top of one. 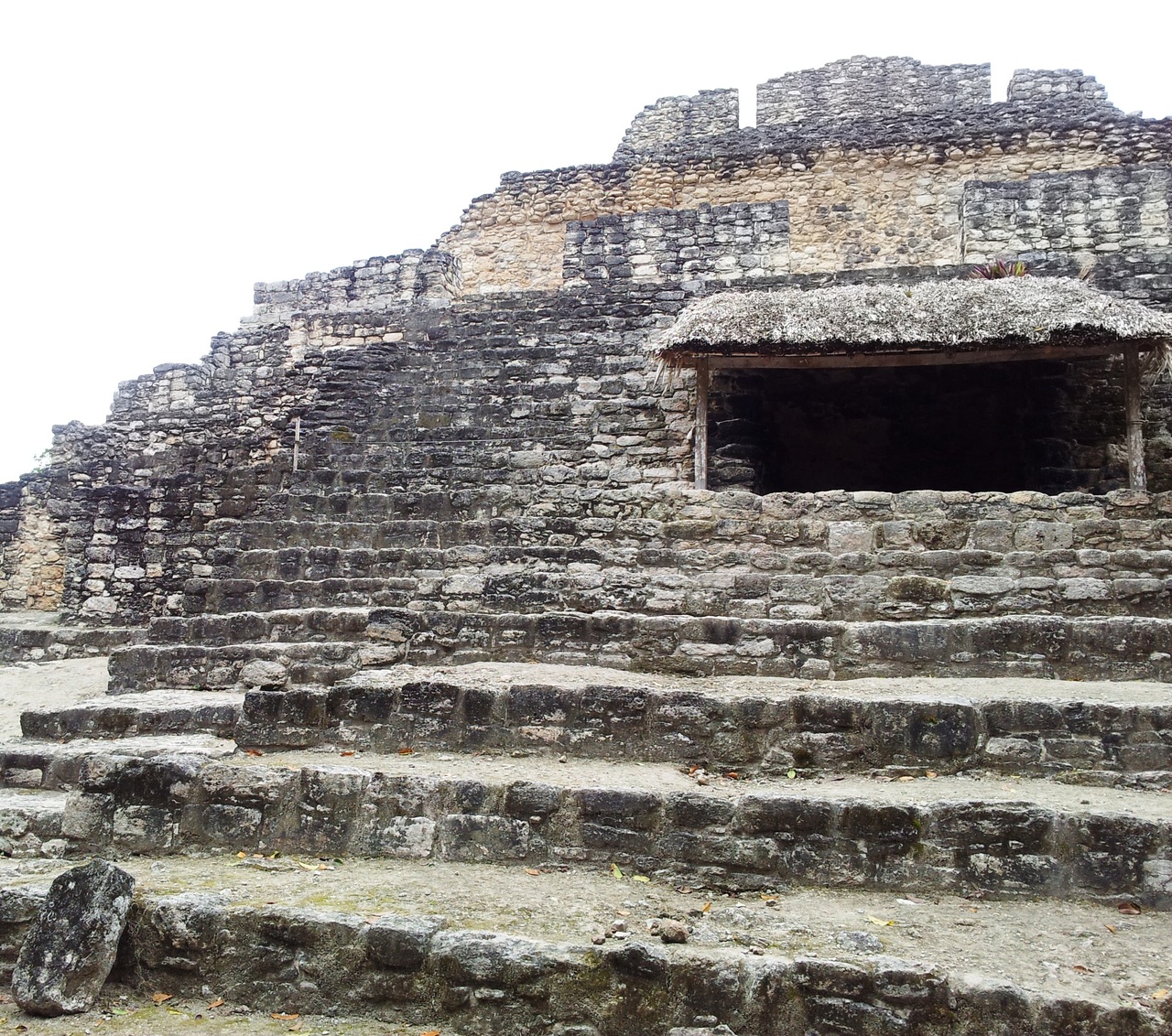 I didn't climb up to the top – those steps are rough going! But here is my view from part way up.

Our tour guide explained that the area is in a tropical forest, and over the years, the temples of Chacchoben were completely covered by vegetation. Little by little, archeologists have been uncovering the plants to reveal the ancient buildings. 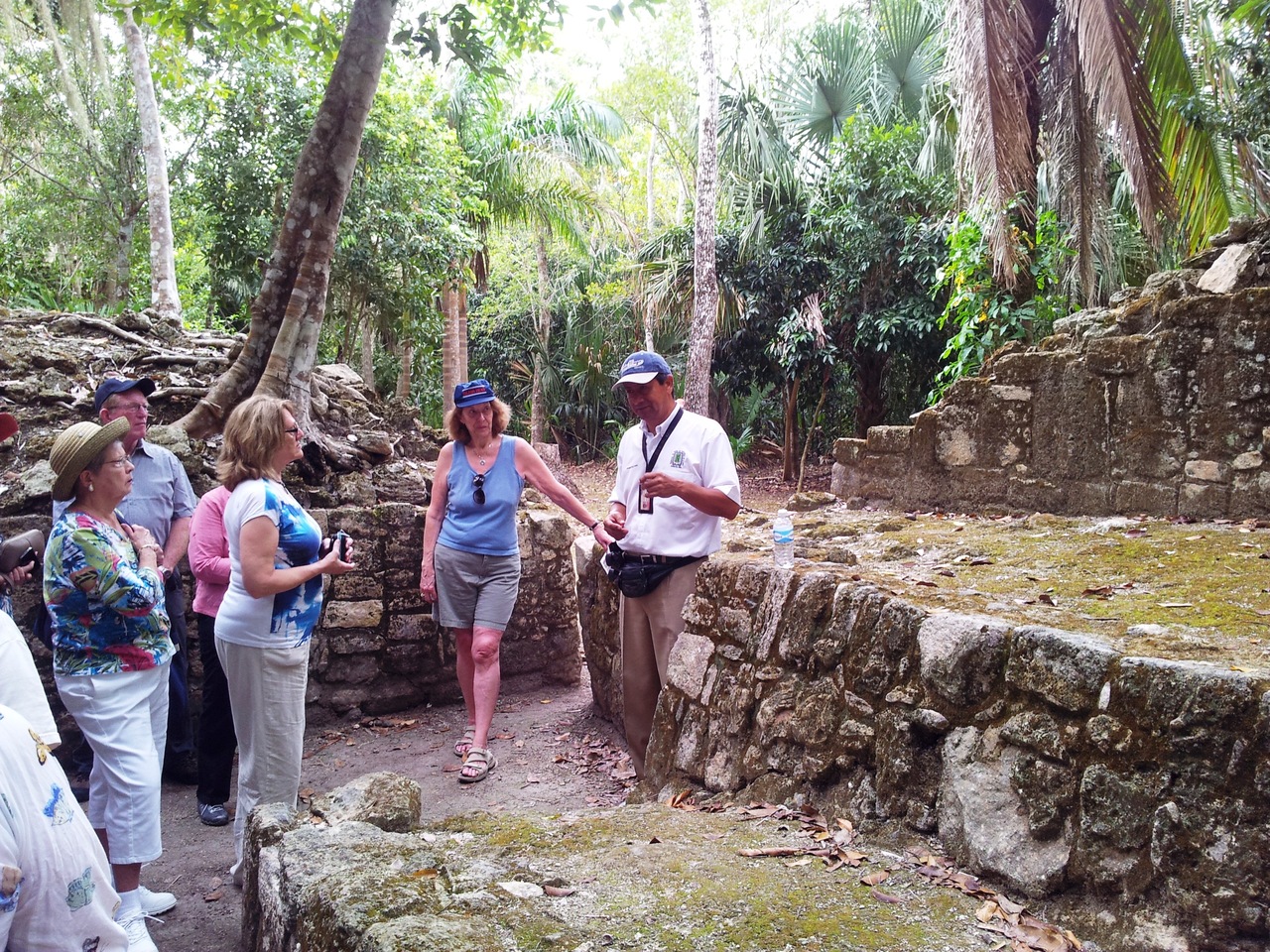 Here are some pyramids that are in the process of being dug out. 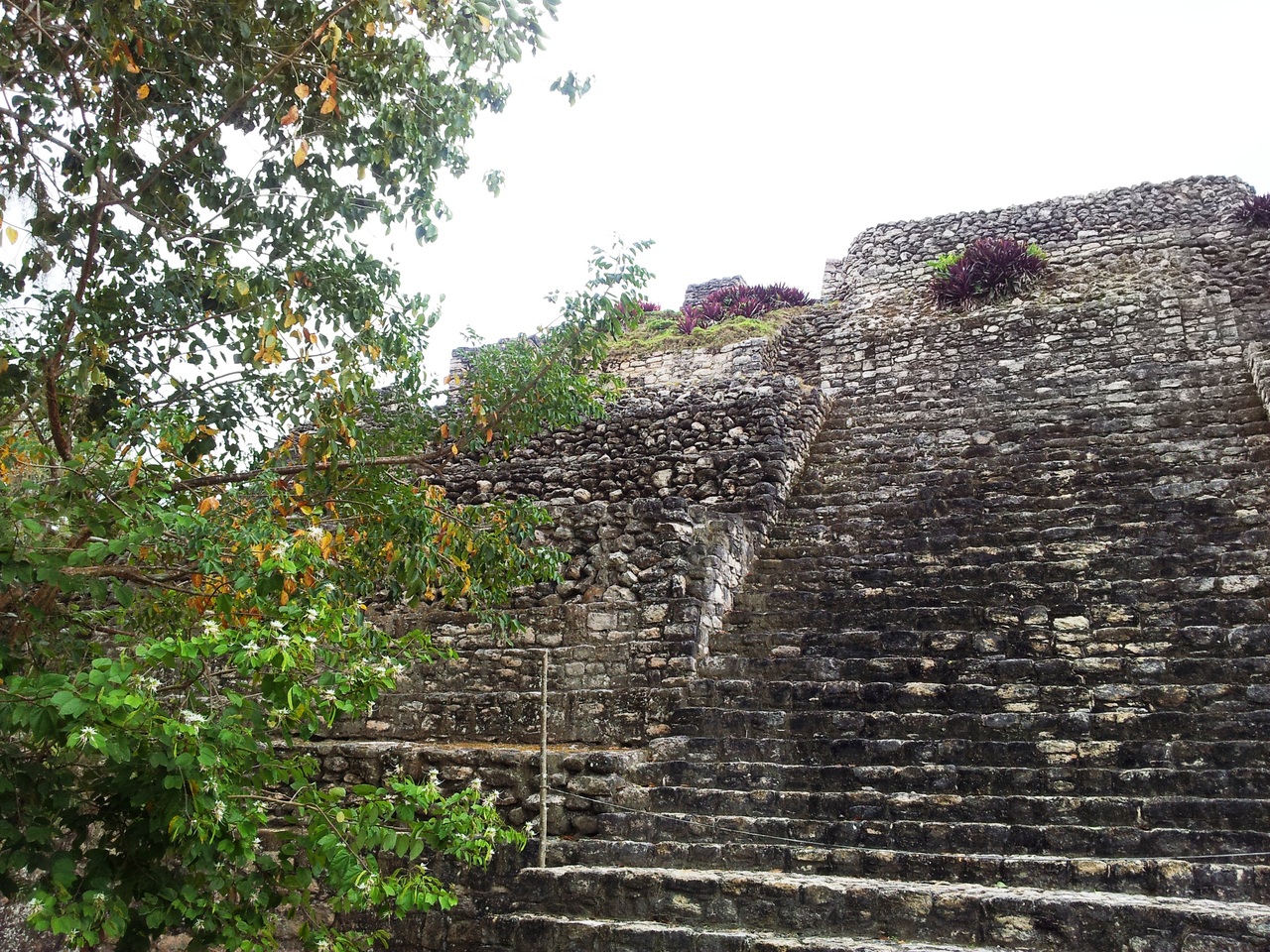 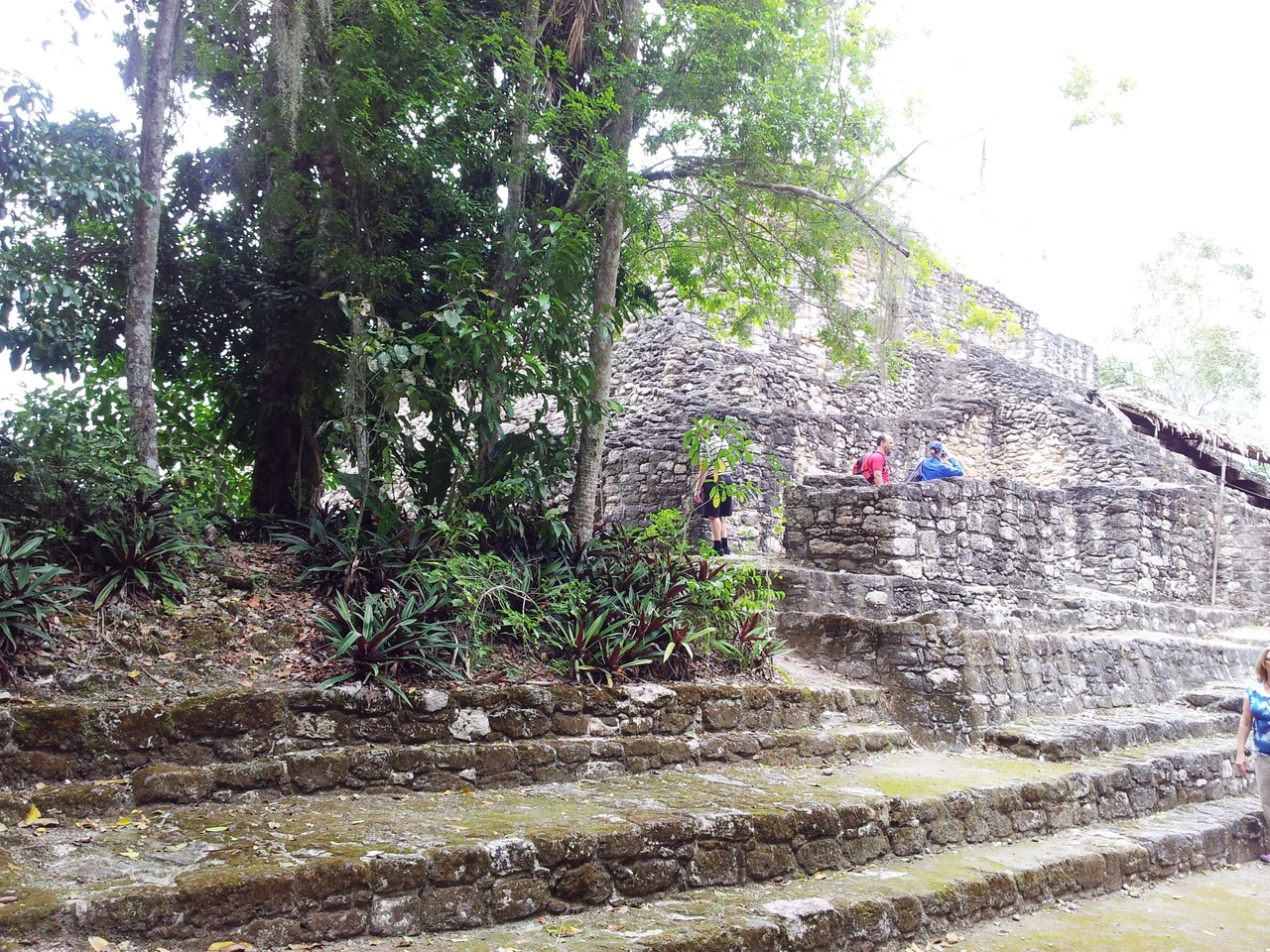 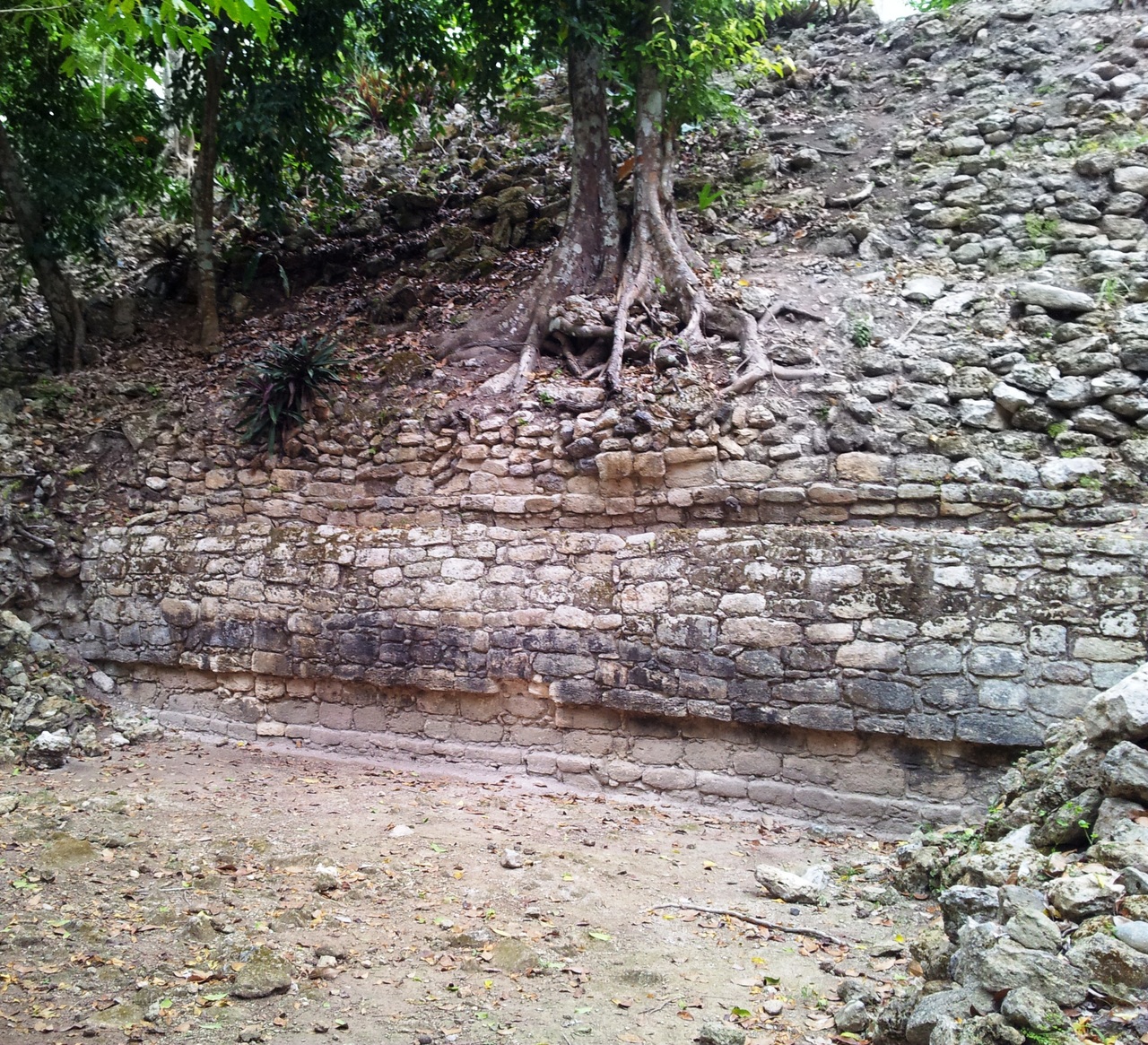 Some of the trees and plants in the area. 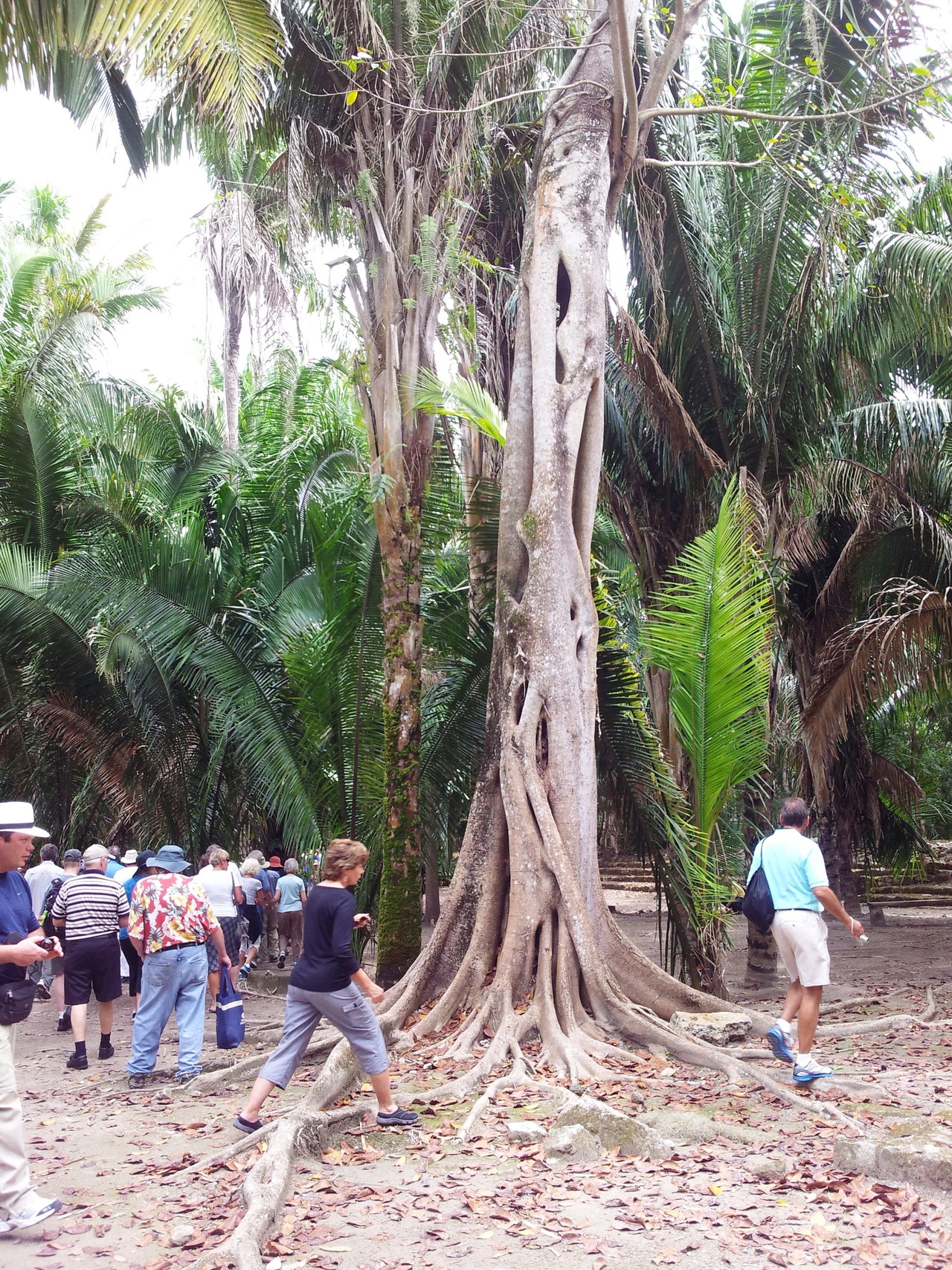 After the tour, we had a little time for shopping. 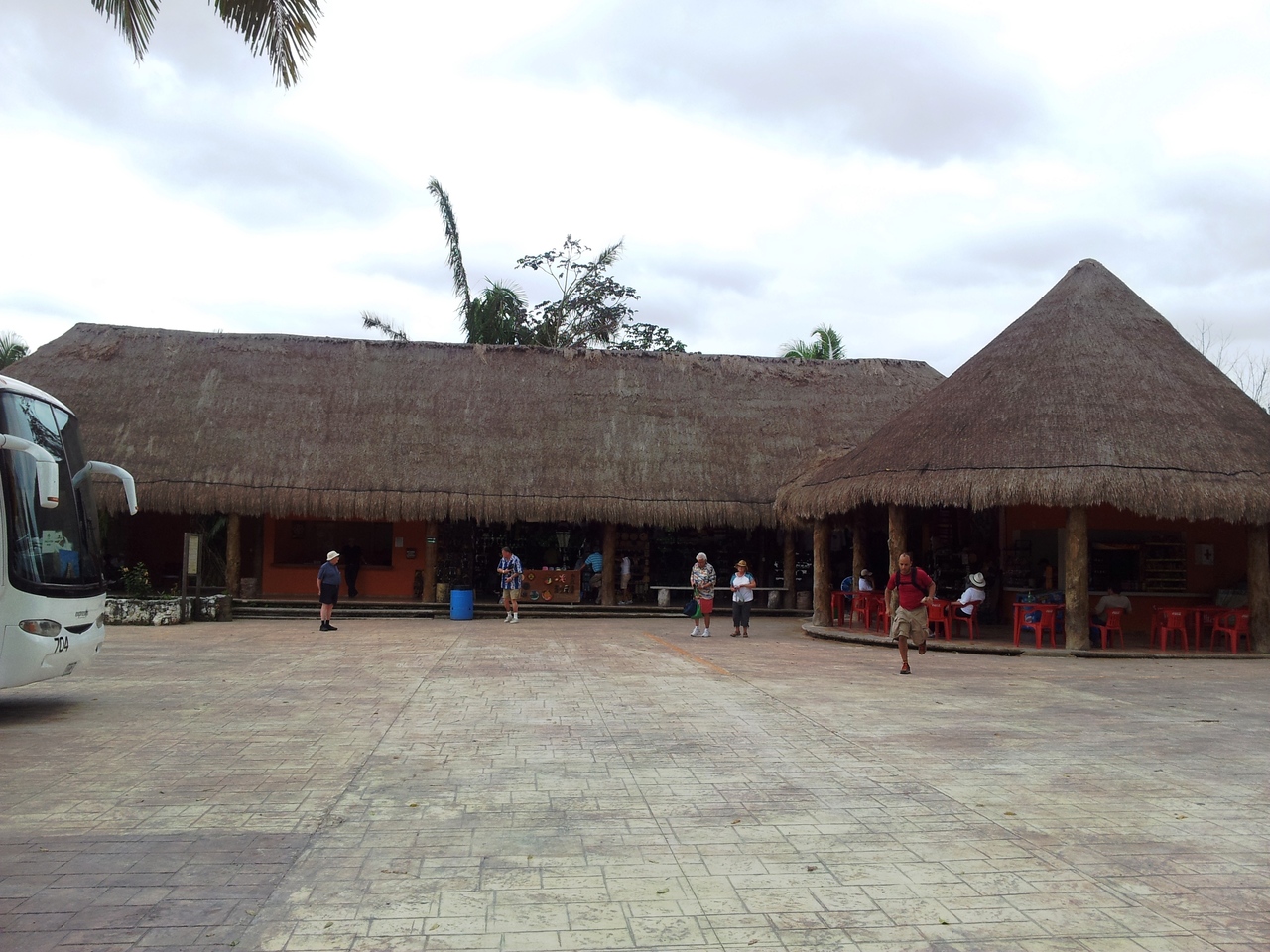 John and I enjoyed learning about this ancient civilization and the efforts to uncover the ruins. It's been 8 years since we were there. I wonder how much more of the area has been excavated since then.

Here's a simple breakfast kids will love (as long as they don't have allergies).

And it's easy enough for them to make on their own.

You can substitute the blueberries with fresh raspberries, sliced strawberries, or sliced bananas. The fresh fruit is healthier than jam and tastes better. 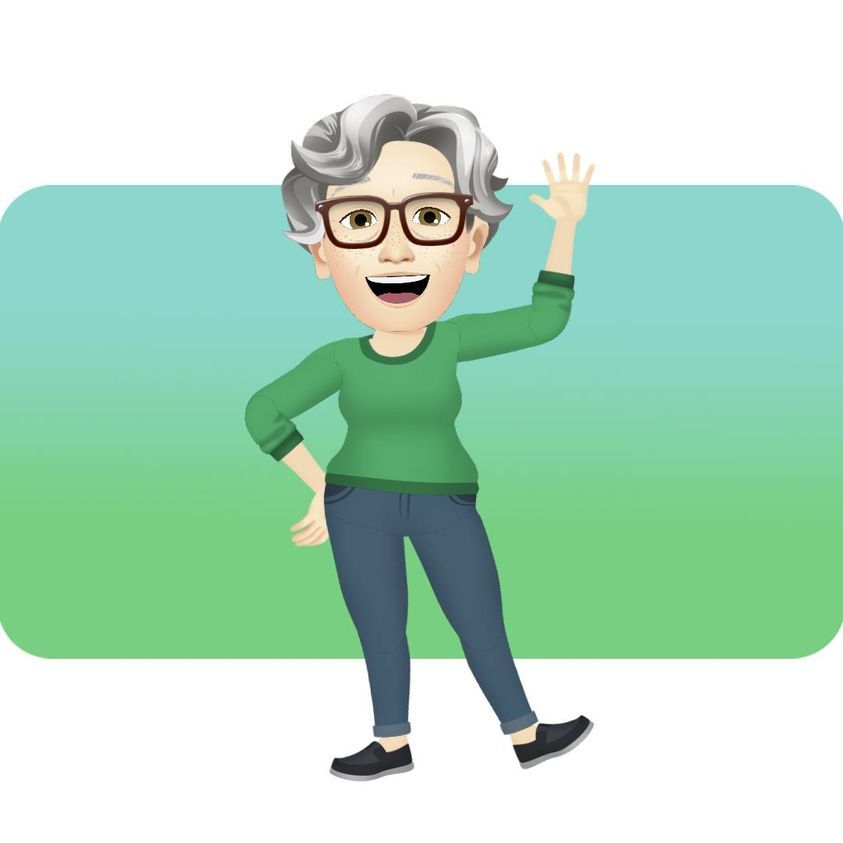 Until next time, enjoy the summer and enthuse your muse!